This is for you if:

tl;dr
because this is likely to be one of the
longest sales pitches you’ve ever read.

Websites are breaking the internet.

In 1983, ten years before the World Wide Web was an actual thing, the underpinning technical network protocols (TCP/IP), that later allowed the web to fully exploit the glory of kitten videos, were activated. And in simple terms, they were created in a world that was expecting to pass small numbers of relatively large files between users; imagine scientific data files and military documents. The adoption of the web - which is a way of linking documents across those agreed internet protocols - changed that almost immediately, and in the twenty years since the web arrived, we have seen nothing but a huge and growing switch to large numbers of relatively small files every time you want to look at (almost) anything online. This is a problem. We think the simplest cause of this is the gulf that exists between the technologists who maintain the internet and those who build the websites that sit on top of it. Really, these guys (and gals, naturally) are strangers to each other, and share very little technical know-how. 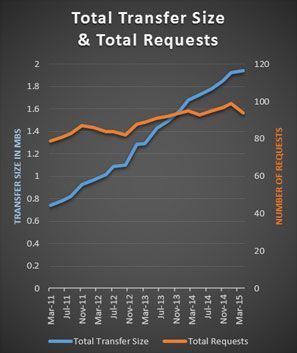 see image, right), and this figure has been growing steadily for years (the graph shows the last four). From a network efficiency point of view, this development has been a bad thing, because every one of those 94 files means a request from the browser to the server (we’re assuming you know what those words mean), and each request has its own response overhead slowing things down. These network inefficiencies have been partly compensated for - in user experience terms - by increased computing power and faster transmission speeds (broadband, as we like to call it). But not enough.

Despite faster broadband, websites are actually slowing down. Yes, really! Here’s some detailed analysis of the HTTP Archive Pagespeed data. The fastest 10,000 websites' homepages measured by the HTTP Archive are getting slower, on average, by about 0.6 seconds a year.

This is where Speedfreak comes in.

Why Else Speed Matters

There are four other things that you need to know, to get your frame of reference right before we tell you how clever Speedfreak is:

1. The faster a website is, the better it converts users to its goals. Simple. There have been a whole host of quotable studies that demonstrate this fact, from which the order of improvement to be expected looks something like this:

2. The growing switch to wireless and mobile sees more and more inefficiencies in the network, making sites achingly slow when built with the ‘lets-break-the-internet’ methodology; 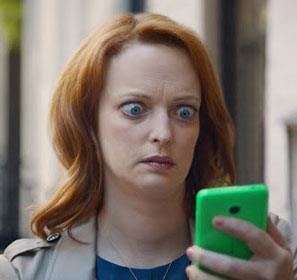 with ‘buffer face’ becoming a cultural phenomenon. (As depicted, in the image, right, from the EE Kevin Bacon advertising campaign in the UK.)

The switch to wireless and mobile access to the web is unstoppable. In the UK in 2014 almost 60% of the 38 million adults accessing the internet every day were doing so on a mobile phone (Source: Office of National Statistics), and that number is continuing to grow.

Wireless networks are inherently slower than wired ones because, amongst other things, once you start throwing packets of data into the air, more of them tend to go missing, requiring them to be resent, requiring adjustments to the amount of data being sent at any one time, and slowing things down in the process.

3. Google, the most powerful aggregator of web traffic, has decided that mobile friendliness and speed on the web need improving, and is throwing its power at solving the problem.

This may sound like a good thing for users, but for website owners much pain is ahead. Google has a stated ambition to get all the pages on the web to load in 100 milliseconds (0.1 seconds). For context this is about 50 time faster than they currently do! In other words Google wants an instantaneous response. And how is it going to make that happen? Why, with a classic carrot and stick approach:

Carrot - higher rankings for mobile-friendly websites. General website page speed has been a ranking factor for years, however, the April 2015 Mobile-Friendly Algorithm Update specifically improves the rankings of sites Google has assessed are friendly to mobile users (which naturally includes their speed). 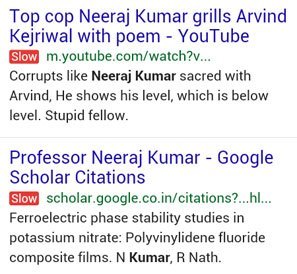 Stick - active deterrence of visits to slow websites. Expected in 2015, Google is testing a bright red ‘slow’ flag in the search results next to sites it has assessed are sufficiently slow to provide a poor user experience; could that be your site? Example, right, already observed in the wild.

4. Despite Google’s ambitions, there is no absolute speed goal. Website speed is relative. While instantaneous would be wonderful, the crux of the matter will always be: Can a user satisfy their goal quicker somewhere else? If the answer is yes, and the slower site is yours, you are in trouble, whether its 1 second or 21 seconds.

Understanding your website in its competitive context is the key to establishing how big a problem you have, and the risks should you fail to act.

So, what have we learned?

Still with us? Great. So now, this is where Speedfreak comes in.

Making websites faster turns out to be more complicated than first appearances may suggest. There are plenty of sources of advice (some free) about making a website faster, not least Google’s own Pagespeed tools, but they fail to communicate the difficulty at its heart.

What none of them tell you is that it is possible to make your website slower by following their advice.


The first clue in the Google tools, for example, is that it is offering advice about ‘page’ speed, not ‘site’ speed. Most users who visit a website do so by visiting more than one page, and certainly those who convert have to. The experience of visiting more than one page has a number of dependencies and effects that are impossible for Google’s free tools to understand, for example, caching. What decisions you make about how certain assets, such as images, are handled - cached, encoded inline, etc. - are dependent on their use on later pages or visits. Google can’t know this, so its advice is sometimes incorrect.

You may be considering implementing HTTP/2 as a replacement for HTTP 1.1 as the network protocol on your servers. It is, after all, primarily focused on improving the speed of websites (built on the Google-developed SPDY “speedy” protocol). 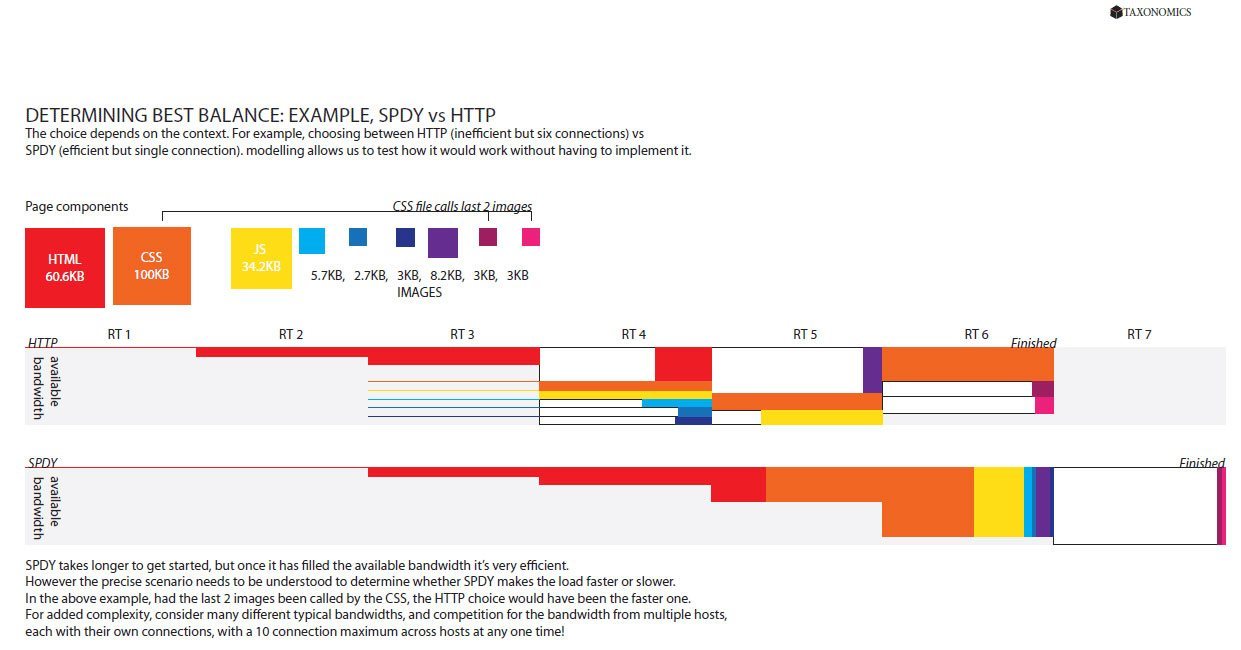 However, there are circumstances where despite its core purpose, it would slow your website down. Click on the image to the right to get more detail on how this can happen.

You could plug in a module to your server software, such as Google’s PageSpeed module for Apache and Nginx which is designed to automatically apply a set of speed ‘best practices’ such as dynamically optimizing images, and combining and minifying JavaScript and CSS files. All good ideas in principle, but when we implemented it in a test environment, it slowed down the test site by 20%. All that additional server response time while it dynamically changed things, compromised the speed improvements the optimised assets might otherwise have delivered. If this had been on one of our e-commerce clients' public websites it could have cost them many hundreds of thousands of pounds in lost revenue before they noticed the problem. Let alone the wasted implementation cost in the first instance.

So, counterintuitively, some things designed to speed a website up, actually slow it down.

On the assumption that you want to speed your website up, we work with you to develop a model of your website and the numerous things that have an impact on how fast it is. This model typically includes around 100 individual components and their individual impacts on the overall speed of a typical visit. We then plug into this model the aggregated average page load time from your Google Analytics data and apply an expected conversion improvement for faster loads to calculate the commercial impact of speed on your business.

So far, so good, but the complication in this model comes from trying to understand what sets of combinations of these 100 individual components look like, because it turns out that there are a million times more combinations of up to 100 things (10 with 30 zeros after it) than there are stars in the universe (10 with 24 zeros after it, we think). 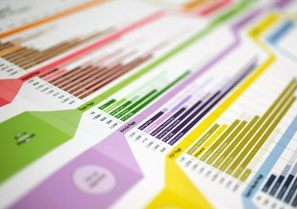 The outcome of this Speedfreak process is usually a top ten things to tackle (yeah, just 17 trillion possibilities to check through and, hence, a proper data science problem to solve). The top ten things that will bring you the biggest speed gains, along with an estimate of the additional revenue such an improvement should bring to your business, thereby creating the business case for the modifications required. It doesn’t have to be just 10 things, it could be more, or less, but we’re yet to meet a client who could handle a list of 100 things to do all at once, so we tend to deliver a more manageable work package. And without Speedfreak, how were you going to decide which of these combinations to attempt?

And it isn’t just a list. It includes a bunch of ‘how to’ advice, because it is normal for the things we recommend you change to be abnormal for the business to be changing. For example, when was the last time you contemplated changing your Linux kernel? Or, do you know anyone in your team who knows how to change your server’s initial congestion window settings? And is willing to do so?

For good measure, and as a motivational stick to keep you all focused, Speedfreak will also generate league tables of you and your competitors, looking at the user experience of page load for a number of page types. They look a bit like this (only bigger!):

And then, finally, given that it is unlikely you’ll stop changing your website beyond a Speedfreak project, it comes with a monitoring service that keeps an eye out for modifications that subsequently slow your website down, and alerts you to the problem.

So, what do you know now?

The benefits of engaging our Speedfreak service are therefore:

And after you have completed the work:

So, you know who to call!

or email us at info@taxonomics.co.uk